For many men, knowing they have some pathology in the prostate generates anxiety; yet they often avoid any contact with a doctor or specialist to be evaluated, because of fear, or shame, or because they are intimidated or feel their manhood is threatened. All in all, they have too many excuses for not seeing the doctor.

It should be clarified that the prostate, a small organ of about 10-20 grams, located in the man’s pelvic region in front of the rectum (the reason for the DRE – feeling the prostate through the rectum) may have two main diseases: one is prostate cancer, which occurs mainly in the periphery; and the other, on which we will focus on this occasion, is benign prostatic growth, which develops mainly in the central area (through which the urethra passes). 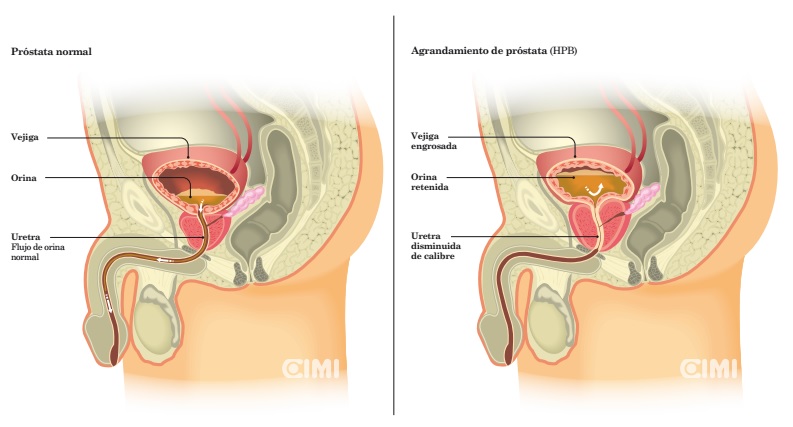 Benign prostatic growth has several possible causes for its development:

The hormonal factor: androgens (male hormones) mainly testosterone, which decreases with age, and dihydrotestosterone (a metabolite of testosterone 10 times more active), which remains the same or increases with age; estrogens despite being one of the main female hormones exist in men in low numbers and increase with age. These hormonal interactions promote prostate growth apparently because they prevent the cells from dying and by avoiding death, there is an increase in the number of cells.

The prostate factor itself: at the microscopic level, the organization of the tissues is altered, specifically the stromal-epithelial interaction, which causes excessive and progressive growth. This is enhanced and benefited by the Growth Factors which are normally present, going from normal to progressively increased levels.

Inflammatory Factor and Cytokines: one theory about the growth of benign prostate is that following an inflammatory process that continues in time and which is marked by cytokines or cytokine, not only favors the stimulation of cell growth but their multiplication.
Genetic and familial factors: an association between benign prostate growth and some genes has been found, indicating an increased likelihood of developing the disease when already seen in several of the men in a family.

Other etiologic factors: science does not stop and that is why every day it discovers more possible causes of prostatic hyperplasia, and this in turn allows developing new therapies for treatment. Thus, alteration in signaling of nerve impulses, altered RHO kinase system, altered prolactin, alterations in oxygenation of the prostate, among others, have been found.

Anatomically, the enlargement of the prostate occurs mainly at the central level more accurately at the peri-urethral level (around the urethra) in the transition zone.

This progressive growth begins to obstruct the passage of urine from the bladder to its expulsion, presenting “symptoms” gradually. These symptoms do not necessarily have an order of appearance but can be classified into:

– Polakiuria: is urinating more often than usual. It is considered normal for a man to urinate 5-6 times a day, however, this depends on each person. A practical way to find out is ask about the urinary habit, if the frequency has increased compared to a few years ago (e.g. as when he was 20 years old).

-Nocturia: urinating more often at night than normal. The normal is not to get up to urinate at night, however it is possibly a habit to do it once a night. Again the practical way is to compare it to years ago.

– Dysuria: is painful urination. Patients feel a burning burning in the penis or lower urinary tract during urination. When the pain is at the start of urination it is considered the origin is urethral and if at the end of the urination, it can be from the bladder.

– Urinary urgency: the urgent need to urinate, and if it is accompanied by involuntary leakage of urine, it is considered urinary incontinence.

– Decrease in the size and strength of urination: as its name indicates, the size and force of the urinary stream is decreased progressively, so patients are mostly unaware of the change and consider it normal. That is the reason to ask during the evaluation, if compared to years ago or when he was young, whether the caliber and strength were equal to the situation at present.

– Urinary Hesitation: also called delayed onset of urination. Urine usually flows one second after relaxing the sphincter and the time increases in patients with obstruction secondary to prostatic growth.

– Intermittency: refers to the involuntary cessation of flow on more than one occasion during urination, presenting several voids within the same episode.

– Drip or post void dripping: after finishing urination, the patient has urine leakage, which is quite uncomfortable and limits social life.

– Straining: also called pushing, is the use of force or abdominal pressure to help urination. Normally a man urinates effortlessly.

“Have a checkup with your urologist and find out if you have a prostate pathology.”