My vocation to be a doctor arose at a very early age. I have always believed that with persistence and perseverance it is possible to achieve any goal. Today, I am in the University of Southern California sharing my experience in robotic surgery and urology, but my training is 100% Venezuelan. I am very grateful to EFE Agency for the interview that I reproduce below: 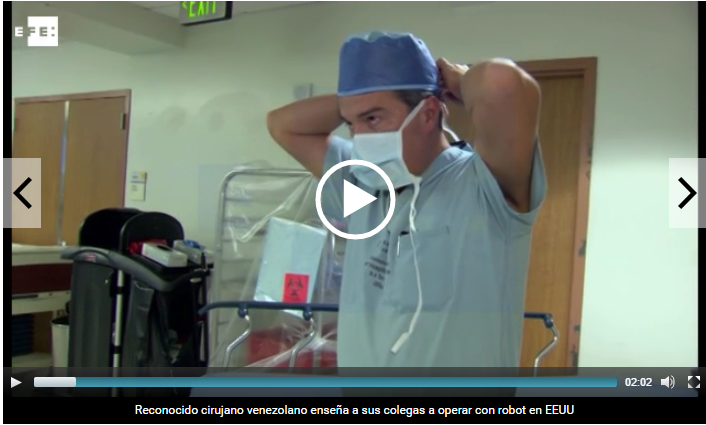 The skills of Venezuelan René Sotelo to treat urological problems with non-invasive robot-assisted surgeries made the University of Southern California (USC) call him to teach his techniques to his colleagues in the United States.

For this, this University applied for his medical licensure to the Medical Board of California in order to train his colleagues in the US, a request that USC has submitted only twice in its 130 years of institutional history.

In the US, obtaining a license to practice medicine is possible mainly if the applicant has graduated from a US university, and in the case of foreign health professionals, if they have approved the examinations of the relevant medical school.

However, as Sotelo, a professor of clinical urology at the Keck School of Medicine at USC, revealed to Efe, another option to obtain the medical licensure is through the academic way.

“This alternative applies when the Medical Board of California considers that the doctor or researcher has some uncommon abilities”, he said.

Sotelo, who is 53 years old, graduated in 1987 from the medical school “Luis Razetti”, of the Central University of Venezuela, and specialized in laparoscopic surgery.

With the creation of the “Da Vinci robotic surgical system”, which is available since 2000 in the operating rooms, he added his experience in “minimally invasive” surgery to robotic surgery.

Over time and after accumulating significant experience in that field, he received up to 70 doctors from all over the world to be trained by him.
In the US, “I operate, I am in charge of everything relating to laparoscopic and robotic surgery in the area of oncology; and besides surgery, I participate in teaching”, stated Sotelo.

Sotelo, who joined the team of professors from the USC School of Medicine in August 2015, also said that he shares his knowledge with colleagues all over the world in an annual medical conference, where he performs“live surgery”.

“Today I just operated on a patient who had two years with a probe and who could not urinate”, said the expert, referring to the satisfactions his profession has given him.

“It was a Mexican patient, he was scared, he was terrified to undergo prostate surgery. I met him, we talked to him, we developed an immediate connection, and then he said: God’s timing is perfect. I found the surgeon who will operate on me”, said Sotelo.

“I just operated on him and the surgery results are spectacular”, said Sotelo, who has performed more than 2,300 surgeries during his professional career, including procedures in 24 countries.

He considers that one of his greatest contributions is being a pioneer in complex urinary fistula surgeries, using surgical methods that have been published in scientific journals.

Aware that in the US union of health professionals Hispanics are needed to take care for patients of this demographic group, Gill recommended Latino students to collaborate with experts, seize the opportunities to obtain scholarships and do medical research.
The American Association of Medical Colleges (AAMC), in the report “Diversity in Physician Workforce: Facts and Figures 2014”, points out that by 2012 the total active doctors in the country increased to 834,769.