Although not a common disease in our area, it is important to detect since its evolution can be fatal and devastating, not only for health status and patient survival, but also for the quality of life

Of the urologic tumors, penile cancer represents one of the less frequent, with 1 case per 100,000 men in the United States and Europe, with variations by demographic area: 0.7 3 per 100,000 people in India, Brazil 8.3 per 100,000 men; surpassed by Uganda, where it is the most commonly diagnosed cancer. By race, it is more common in Hispanic whites and less common in blacks and non-Hispanic whites.

Risk factors important for the development of penile cancer can be identified clearly and precisely, among which are social and cultural habits, hygiene, and customs associated with religion.
The presence of cancer is rare in communities that practice circumcision in newborns or before puberty (Jews, Muslims and the Ibo of Nigeria). “Early circumcision reduces the risk of penile cancer between 3-5 times, but it should be clear that adult circumcision does not protect against penile cancer,” says the American and European urology guidelines.

The risk factors most clearly identified for this condition are phimosis (the redundant or large foreskin), chronic inflammatory condition of the foreskin or head of the penis (glans) resulting from conditions such Balanopostitits, lichen sclerosus and atrophicus (xerotica balanitis , common in diabetics); sexual history (multiple partners, early age at first intercourse) and patient report of warts (lesions on the penis with a fluffy appearance). All these are associated with a risk of 3-5 times more of penile cancer, in addition to smoking cigarettes, which increases the risk of the disease from 4 to 5 times.

It is Important to point out that because of modesty or fear, men do not immediately consult a specialist and prior to this start nonmedical local treatment, resulting in the progression of the disease and a terrible unfavorable outcome for both the patient and his urologist.

Once the diagnosis is made, the disease is classified according to its severity in order to offer local treatment or to go immediately to surgery with a penectomy (removal of penis) which can be complete or partial depending on the case. After this, the possibility of involvement of the lymph nodes is classified, which is the site where the cancer spreads, mainly to the ganglia in the groin and the pelvis.
Given the possibility of lymph node involvement, a resection should be done immediately to ensure no spread of the disease and improve the patient’s chance of survival.

Nowadays there are two possibilities for surgical treatment, open and minimally invasive (laparoscopy and robotics). A few months ago, in Caracas, specifically in the La Floresta Clinic, the first robotic inguinal lymphadenectomy in Latin America was performed, and the third in the world, by our group, the most experienced and with the most reported cases worldwide, allowing us to discern clearly the advantages of robotics in such operations, among which are better identification and dissection of the anatomy, less scarring, improving the aesthetic factor, important for many patients; also there is less chance of intraoperative and postoperative complications, resulting in a faster return to daily activities. The day after the procedure the patient said “it’s amazing to know how medicine has improved in the world and in Caracas.”

INFOGRAPHIC LEGEND: The working ports are placed for the robot-assisted laparoscopic approach, taking into account the different anatomical structures surrounding the affected area. Then the arms of the robot are connected to the working ports. 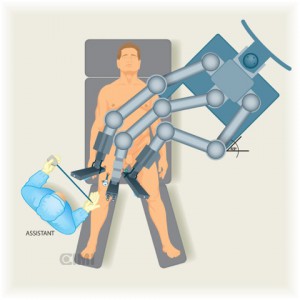 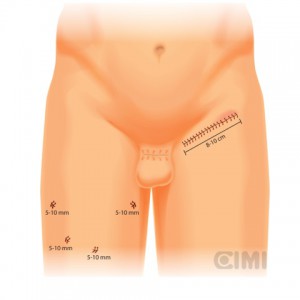